Below are the guidelines for the species!
At the bottom of the page, there is an infographic we've made to make it easier to visualize.

There's bases below you are welcome to use! Just credit the owner (Each base is named after the artist)

These are the features all caprigons must have:
Back hooves (cloven or solid)
Hand paws with pawpads
Goat shaped nose
Curl-tipped dragon wings OR feathered wings
Horizontal to downturned ears
Horns
Majority (60%+) of the body covered in fur

Caprigons commonly have these but they aren't a requirement:
Fangs/Tusks
Scales
Spikes
Bone protrusions
Non-fur areas on the body, either fleshy or scaley


Caprigons can NOT have:
Multiple fur/flesh body parts (Only duplicated body parts allowed are wings and eyes)
Ears that point upwards
Shells (turtle, snail, etc)
Fluid-filled or otherwise hollow/intangible body parts (Bone sections may be made of anything, this is specifically for the body/fleshy areas)
Prosthetics, scars, or missing limbs
Hybrids, mermaid tails, or -taurs
Fleshy antennae
Gills

Caprigons are not allowed to be named nobility/royal/deity titles, nor describe themselves with such. Including but not limited to: King, Queen, Prince, Princess, Lord, Knight, Pharaoh, Emperor, God, Goddess, Archangel, Kami. This is only for what they are called or named, they are still welcome to have halos, crowns, or imagery of such. There are very few allowed to be called these; they are caprigons that fit into the lore very specifically and are only created by Mel.
​
Caprigons are not bound to a single form or sex, they are able to change it. More about that in the lore below.

Basic overlook and behavior
(Please note: Humans here can refer to anthros as well; it's just meant to be a non-magical sentient being)
Caprigons are a powerful and supernatural species, bound to the material world via an element. They have abilities can answer prayers if they wish. Humans sometimes have shrines (Large or small, size doesn't matter) dedicated to specific caprigons that are friendly or benevolent. They would leave offerings and presents to the caprigons in hopes of getting a prayer answered or protection granted. Offering could be money, but usually it is something that they know the particular caprigon likes; which could be literally anything.

Caprigons do have the ability to act as a "god" of sorts; but most do not answer prayers or grant wishes, at least not habitually. They are always chaotic neutral, doing as they please for their own personal enjoyment and rejecting any kind of authority that is not their specific king (See "hierarchy" below for the King info) It just so happens that giving caprigons what makes them happy can...persuade them to do favors, aka granting wishes.
They are not folklore or a fairy tale despite what some say; they're creatures born from the energy of the universe, capable of amazing feats. Due to their nature and appearance, and the fact they aren't seen by humans often, they are often grouped with demons and most humans don't believe they exist at all. Even if they pray to one at a shrine it's seen as nothing more than wishing or good luck charms.

Caprigons and their forms
They have 3 shapes they can take on. A quadrupedal, long bodied dragon form (the True form); a bipedal anthro form (the Common form), and a human/generic animal form (the Visible form). The true form varies in size according to how "strong" they are, aka their hierarchy ranking. Eros is fairly weak, so she's maybe 6 ft tall on all fours. Johann is one of the kings, and she is around 20-25 ft tall. Caprigons in their visible form take on the appearance of the dominant species in their world. If the world is humans, they appear human except with pointed demon ears, their eyes, fangs/tusks, tail (which they usually keep hidden) and an unnatural hair color that matches their fur. If the world is full of anthro species, they have a goat's shape including hand hooves, lack of wings, and have a goat's tail instead. They do retain their tusks, colors, and ears.  Initially Caprigons in their True or Common form cannot be seen or heard by humans, but if said human is wounded by a caprigon or other supernatural being, they can see the supernatural for the rest of their life. If a caprigon is in direct contact with a human (ie carrying them), that human can temporarily see the caprigon as long as they are touching. Caprigons in their visible form are able to be seen by anything and anyone; which is why they mostly blend in.

The caprigon forms are for story/lore/character building reasons and not a necessity. If you are doing art or cute stuff with your caprigon and other OCs, by all means use whatever form you desire even if it breaks the rules on if they can be seen or not. Most people just use the common form only, and the visible human form is easy for costuming and being in character without getting a full fursuit. True form is good for feral artists to draw

Elements
Their element dictates what their abilites can be. This element can be a feeling/concept (luck, despair, life, decay, fortune) or a natural phenomenon (snow, lightning, lava, stones, light, air, gravity)
Their element does not change, ever; and they only have one. They have a few abilities based upon the element. Using Eros as an example, her element is that of love. She is able to cause those around her to feel joy, love, and acceptance, and is able to grant mild prayers that are related to one's love life or happiness.

There is only one element that no caprigon is allowed to have, any variation of it is off limits. That is the element of Creation; the ability to create things from nothing, to bestow life where there is none. (The element of life sounds similar, but it cannot create things, nor make nonliving/inanimate things come to life. It can grow plants, or heal things currently alive. If a caprigon has the ability to manifest an object, the object is removed from another location; not created from thin air. Say, they snap their fingers and a glass of water appears. The glass just teleported there from elsewhere, maybe from someone random fox who has gotten themselves a glass and is now bewildered.)

Hierarchy/Kings/Origin
Caprigons have a hierarchy within their own species. It is not a ruling class, but instead more on strength and relations, the strongest of which are known as kings. There is a single one that is above all, and multiple that serve/assist her. All other caprigons are kin to one of the kings, and their strength dictates where they stand to their siblings. This hierarchy is not like the ones humans have, where the higher ups set rules and control others. The caprigon hierarchy is related to their raw strength and power, and the ones on top are stronger than the rest. They care for their kin, and are more of a protector than a ruler. Their kin tend to listen to them anyway, as it's in their best interest to not anger someone who can kill you.

Sol (King of Caprigons) has the element of creation. She is the one who created the other caprigons. All caprigons are considered her children as they are born from her power.
Johann (the King of Time) has the element of Time and space. She is able to warp space and make even time bend to her will. She is associated with black flames

Sol has not created other Kings yet, but she has plans to do so.

Changing appearance
Caprigons are able to change their appearance if they wish, or they can be unwilfully changed if something major impacts them. They also can choose to have a sex but normally do not have one, and have no real concept of human genders. They're not tied down to their appearance at any time, but it does take a lot of effort and energy out of them to change it. Usually their appearance reflects how they want to be seen and the things they like. Any colors, any shapes, etc. A caprigon loves the ocean? She might have an elongated body and fins like a fancy fish, with horns and spikes that have membranes on them. A caprigon likes snow and winter? He could be more white and blue hues, with long, shaggy fur and caribou horns. One that likes religious depictions of angels? Probably has an extra set of eyes and wings, lots of golds and white colors, and might even manifest a halo or a crown of horns.

When they are to change appearance, their element consumes their old body. Eros as an example again, she used to have no black on her and no hearts. Her element consumed her, and her body glowed pink and white as if she was on fire. It went out with a flash, and she had been renewed as how she looks today.

Reproduction
Caprigons do not reproduce, only Sol has the ability to create new life. If two caprigons want a child, they can request a youngling from Sol (You can make caprigons young, but lore-wise they have to be created by Sol even if they have "parents") 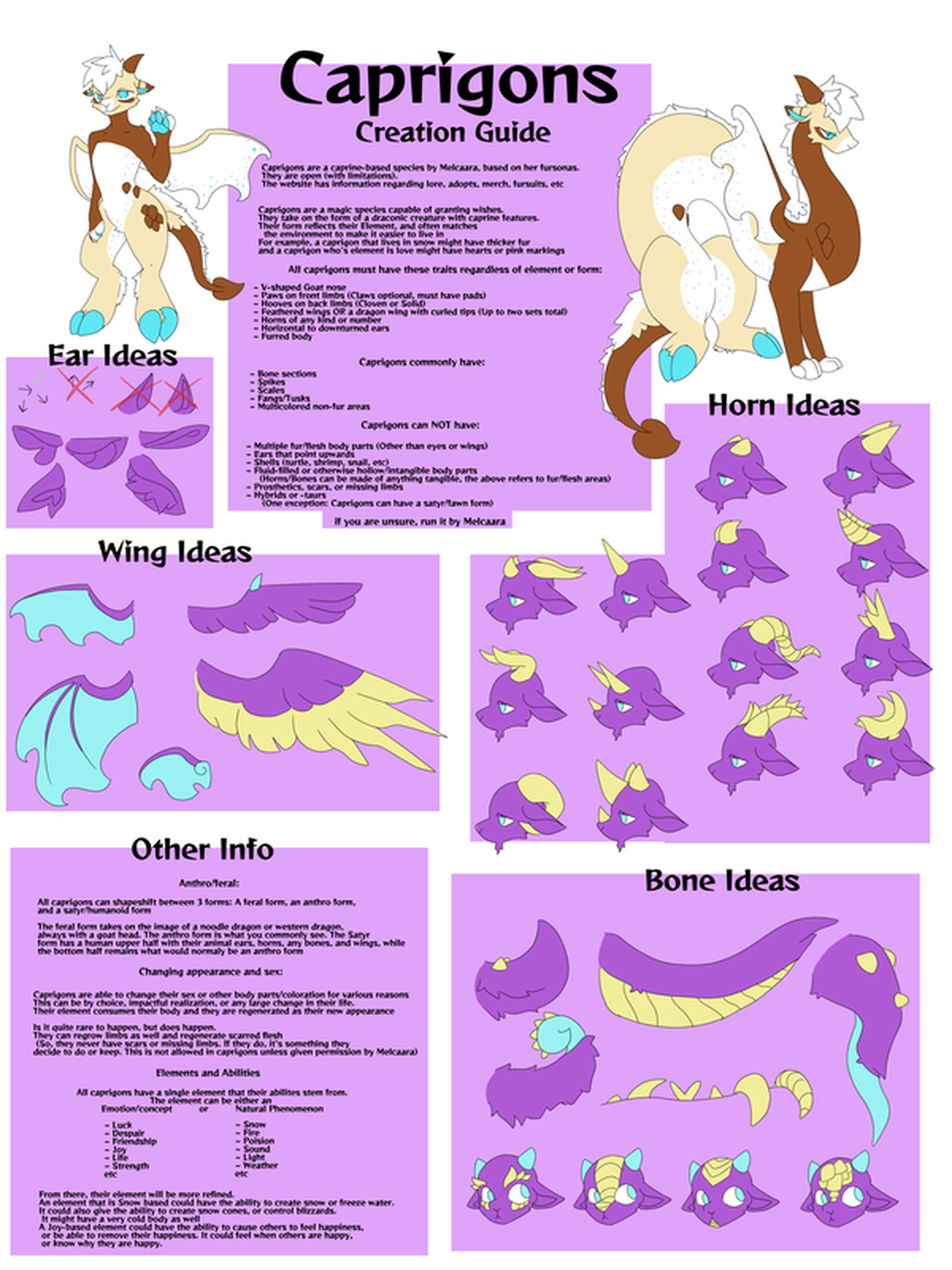